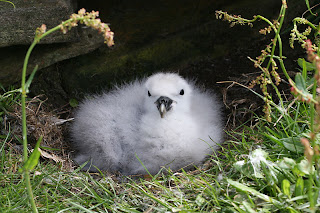 Check out this little baby bird which looks so cute and defenseless!

Baby birds are at the mercy of predators. They cannot fly and will easily become lunch of a predator which comes near to their nest. That is why the Northern Fulmar, Fulmarus glacialis ,a species of sea bird that nests on cliffs , has developed an innovative, thumbs-up defense mechanism that keeps chicks safe and intruders from ever returning.

The Northern Fulmar can be found in subarctic regions of the north Atlantic and north Pacific oceans and can be the most disgusting animal in terms of defensive behaviour. The term fulmar means “foul gull,” and it is aptly named. When confronted with threats, from predatory eagles to unwary and unlucky rock climbers, the fulmar chick will vomit acidic stomach oil all over the approaching animal in a projectile manner! Yes, from what we learnt in physics..

“Oils from consumed prey are converted to a high-energy stomach oil, and this may occasionally be fed to chicks (along with regurgitated, partially digested prey), or used as fuel for self-maintenance…allows fulmars to projectile vomit stomach oil as a defense mechanism against key predators.”

Mark L. Mallory, 2006,The Northern Fulmar (Fulmarus glacialis) in Arctic Canada: ecology, threats, and what it tells us about marine environmental conditions, Department of Biology, Carleton University, Ottawa, ON K1S 5B6, Canada, Page 195.

“It’s a less-than-charming defence tactic that not only smells hideous, it’s also dangerous: the blast of vomit is highly acidic…”

When the gut oil gets on the feathers of other sea birds, they will glue their feathers together, making it impossible for the poor birds to fly.

“…the feathers which had been hit by the oil became wet during bathing. The waterlogged birds sank deep into the water, were unable to fly and finally died of exposure or drowning. “

Fortunately, the fulmar’s parents are immune to the oils in the chick’s vomit. In fact, they greet their disgusting babies by leaning down low and vomiting fresh fish into their little hungry tummies.

(This shows how mighty parents are 🙂 )

As they say a picture paint a thousand words, so here’s a video link for those who want to see it live!

PRESS HERE AND WATCH OUT!

← I welcome you to the world, gastric-brooding style.
An Odyssey of Thousands of Miles! →