This article is a review of Satoyama Jujo, a hotel in Minami-uonuma, Niigata Prefecture owned by Toru Iwasa. It is written by Jordan Bishop for Forbes, and highlights the luxurious, all-organic experience of staying in the hotel.

Satoyama Jujo is situated in the picturesque Osawa mountains, relatively isolated from the rest of civilization. In order to reach the hotel, you would have to either drive for at least 3 hours from Tokyo or take the Shinkansen for almost 1 and a half hours, then drive for about 12 kilometres from Echigoyuzawa Station. Named for the Tale of Genji, Satoyama Jujo literally means “10 stories of the mountain village”. Those ten literal stories, which the hotel lists as “food, architecture, textile, agriculture, environment, art, outdoors, relaxation, health, and gathering,” are well integrated into everyday life in the hotel. The article pays mentions Satoyama Jujo’s food as one star attraction, which the hotel’s head chef, Yutaka Kitazaki states is made primarily with totally organic ingredients, locally-foraged where possible. The construction of the hotel follows similar principles, mentioning that the reception hall by itself is built exclusively from 150-year-old zelkova trees found in the region. 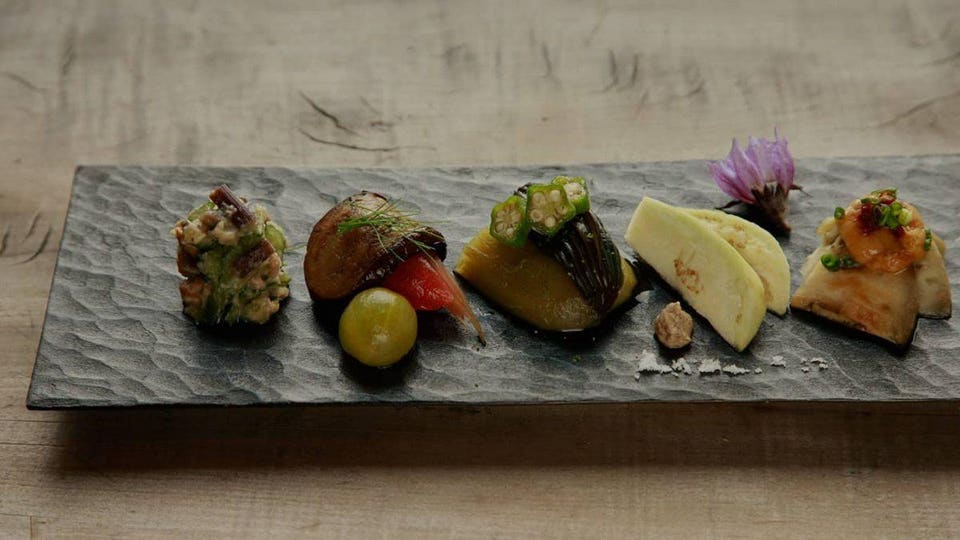 A typical meal in Satoyama Jujo, shown here are nigirizushi made with seafood from the Sea of Japan and prized koshihikari rice grown in the surrounding region. ©Jordan Bishop

The article also explains the history of the hotel – its owner, Toru Iwasa, was an art school graduate born and raised in Tokyo who originally worked as the editor of the well-known lifestyle magazine, Jiyujin. However, growing weary of the haste and tedium of city life he decided to move to Minami-Uonuma, a move mirrored by many other Japanese people in recent times as they search for the concept of furusato outside of the bustling city. Shortly after this, he was contacted by a friend who offered him the deed to the land which would come to house Satoyama Jujo, then only populated by a dying inn. Utilizing his keen design senses and no small measure of targeted marketing, Iwasa managed to make the Satoyama Jujo project known as a premier luxury hotel. He proclaims that Satoyama Jujo seeks to “redefine luxury”, while also expressing that he “wanted to expose people to the benefits of an organic lifestyle in a more authentic way.”

This is problematic on a few fronts. Firstly, the metric of “authenticity” Iwasa seems to use is not reflective of an actual satoyama lifestyle. Secondly, it perpetuates a certain fetishization of an “eco-friendly” lifestyle particularly by the bourgeoisie, which in reality does little in the way of advancing the cause of environmentalism. It is definitely important to consider the benefits of portraying such a lifestyle in a way which is appealing to the masses. However, to claim that the Satoyama Jujo experience is authentic would be erasing the hard work agricultural workers put into allowing the upper-class to enjoy their stay at the hotel, and also ignores pertinent problems of the carbon footprint of tourists and other guests in the simple act of staying at the hotel. It highlights a certain insincerity in the message of environmentalism as  characteristic of the Japanese (Kalland and Asquith, 1997), for on one hand it is claimed that an eco-friendly lifestyle is being promoted while on the other, the actual ramifications of actions undertaken to achieve that image go swept under the carpet. The upper-class is highlighted here because to stay at Satoyama Jujo is rather prohibitively expensive – one night at the hotel without accounting for meals other than breakfast costs at least 20 000 yen (approximately SGD247).

What the Satoyama Jujo experience is, is a highly idealized version of the actual satoyama lifestyle where visitors need not work to maintain the highly manicured environment around them and instead simply benefit off the hard work of others, while allowing themselves to feel gratified by their supposed eco-friendliness by staying at a place which advertises itself to be eco-friendly. When Iwasa states that “You can’t have this experience anywhere else on the planet”, he feeds into the exceptionalism of Japan in offering so-called “eco-luxury”, ultimately doing little to genuinely advance the cause of environmentalism in Japan.