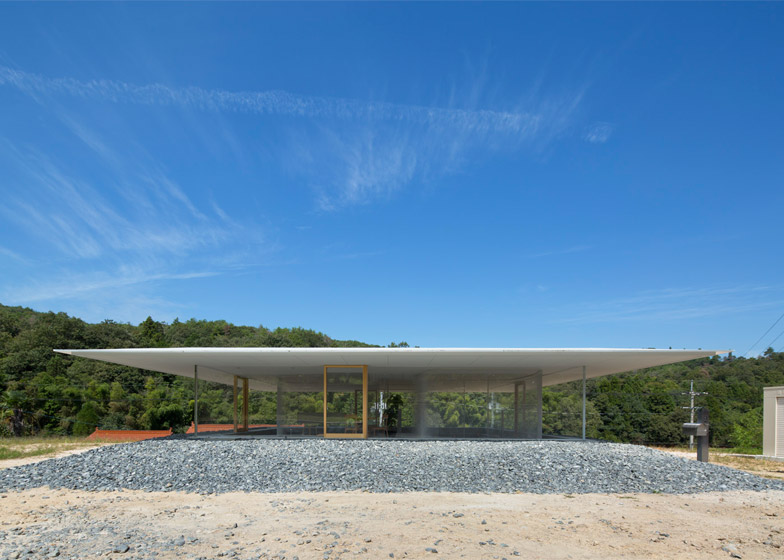 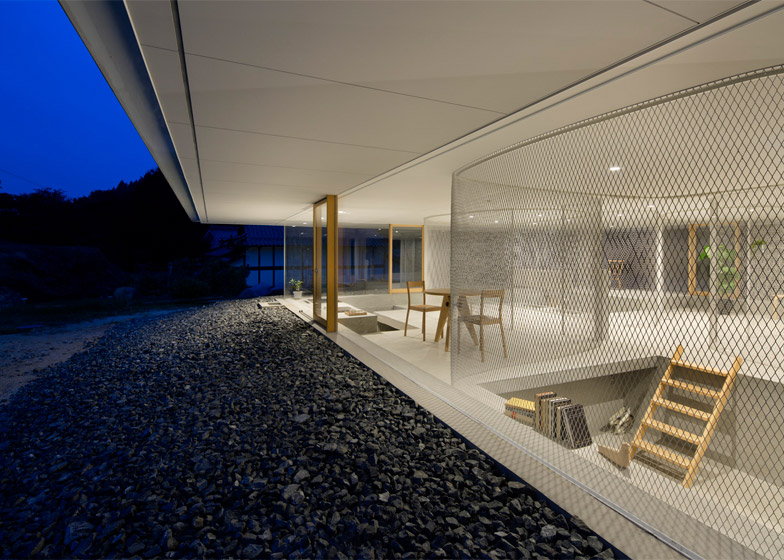 Japanese architecture studio, Suppose Design Office has unveiled its design for a rural house in Hiroshima, named Hiroshima Hut. Tasked with designing a home capable of cultivating a closer affinity between its occupants and nature, the studio created a house that one can see right through, to the trees beyond. Transparent acrylic form the external walls, see-through metal mesh divide its interior, and a concealed underground level affords privacy and additional storage space, keeping visual clutter over the rural landscape to a minimum. The only conspicuous, opaque element in the design is a large, thin roof- illusory suspended in space, with generous overhanging eaves intended to shelter and entice wildlife to its perimeter.

The article describes highly standardised forms of nature surrounding Hiroshima Hut— the animals, docile; the environment, a placid space. Echoing (Saito 1985)’s opinion that “it is the small, gentle and intimate aspects of nature that are chosen as objects and phenomena for praise…”. The narrative further epitomises fantasies whereby humans and wildlife willingly coexist and interact in a harmonious manner, conveniently ignoring the reality that nature has the capacity to cause merciless damage to property and humans.

Though not explicitly mentioned, the architects carefully incorporate various elements of the furusato, the idealised rural village into the narrative of Hiroshima Hut; effectively evoking images of a simple way of life in an unspoilt natural setting where humans engage in leisurely activities staged in the rural idyll (Kalland and Asquith 1997). The Hiroshima Hut can be then identified as a form of Furusato-zukuri, a carrier of the ideals conceived in the architects’ minds, preventing the erosion of national aesthetics against urbanisation and pollution. (Robertson 1988)

Suppose Design Office is portrayed as being reverential to nature. Hiroshima Hut features see-through elements that allows the building to visually blend in with its surrounding landscape. Moreover, the space is not exclusively for human use but allows for animal use too. This further reinforces the myth of the Japanese having a love for nature that is translated into their art and material culture (Kalland and Asquith 1997).

However, the irony lies in the fact that nature here, is still manipulated to create a seemingly untouched landscape for the viewing pleasure of humans. Moreover, the article does not challenge the rationale nor the effectiveness of the architects’ design in achieving its intent of “creating a home that would allow its occupants to be as close to nature as possible”. Replacing opaque walls with transparent ones does not necessarily result in greater nature-connectedness. It is also unclear if the benefits of preserving the visual landscape outweighs the resources required to excavate the land to create an underground level within Hiroshima Hut. Thus, this unquestioning acceptance supports the widely held view that Japan is ‘Green’ and that the Japanese know best when it comes to sustainable resource management. This can be problematic as Dezeen is the world’s most influential architecture and design magazine (Fairs 2016) and widely referenced by design students and professionals worldwide.

One thought on “A see-through house with sunken rooms.”