The unusual flight of Hummingbird

Did you know that hummingbirds (Calypte anna) can fly backwards? 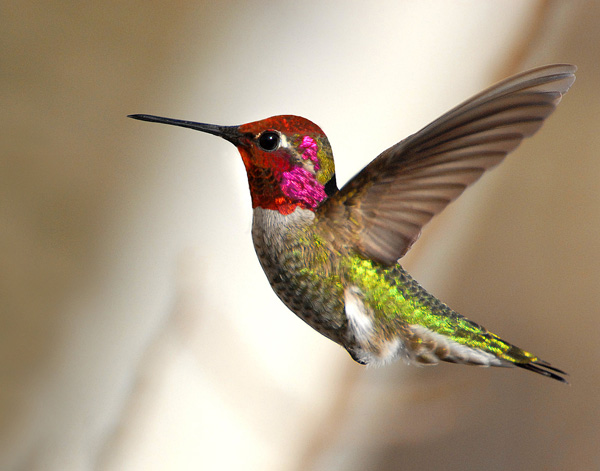 Backward flight is frequently used by members of the hummingbird family as they reverse from a nectar-bearing flower after feeding. It is more demanding than forward flying as it requires ‘greater external work done against gravity at low speeds and greater internal work caused by an increased step frequency’ (Sapir and Dudley, 2012). During backward flight, the bird’s body is held in much more upright position and thus, more work is involved in maintaining that position. Yet, while backward flying seems to require more work, the present study by Sapir and Dudley (2012) demonstrated that this behavior is carried out effortlessly.

TRY THIS: hold your upper arm close to your body with your elbow on your hip,

and flap your forearms back and forth!

P.S This is an imitation of the flapping movement by the hummingbird (Yong, 2011).

Hummingbirds are also well-known for their ‘insect-like flight’ strokes characterized by high wing beat frequency and smaller muscles strain. This other study by Hedrick et al. (2011) showed that hummingbird can efficiently deliver power and strength to its wings with contractions of the chest muscles. Likewise, if you have tried the imitation earlier, we are able to use our chest strength to flap our forearms even though our elbows are stuck to our hips/waist area.

← “Oh, what big teeth you have!”
Do kind-hearted vampires exist? →