In the 1950s, Singapore’s World Book Company published several titles of the renowned local writer Lu Po-Yeh (鲁白野) – Singaporean Sketches (1953), Malayan Sketches, and its sequel (both in 1954) – which quickly became classics of local Chinese literature. The classics were republished in 2019 by the Chou Sing Chu Foundation (CSCF), a non-profit cultural organisation based in Singapore. It was the culmination of a three-year project to bring a new generation of readers up to date with new reading guides and more than 200,000 words of annotations.

The new edition of Singaporean Sketches (狮城散记: 新编注本) comprising 56 short essays has been completely reorganised into six themes: namely, history, personalities, society, evolution, scenery, and anecdotes, each with its own introduction. The topics of the essays cover almost every aspect of Singapore society and people from all walks of life. The book is aimed at the general reader especially those interested in the cultural and social history of Singapore. 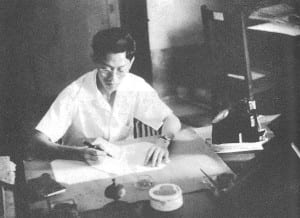 Lu Po-Yeh was known for writing local stories, historical prose, sailing stories, memoirs, poems and translations and also wrote under other pen names such as Wei Bei Hua (威北华), Lou Wen Muk (楼文牧) and Yue Zhi Geng (越子耕). Born in 1923, Lu, whose real name is Li Xuemin (李学敏), was originally from Ipoh, Perak and lived in Sumatra during the Second World War. After the War, he moved to Singapore to continue his literary career. He worked as a translator for Sin Chew Jit Poh and sat on its editorial board. Highly fluent in both Chinese and Malay, Lu was active and influential in the movement to popularise the Malay language among the Chinese population in Malaya and Singapore in the 1950s and 60s. In 1960, Lu was appointed the editor of Majallah Bahasa Kebangsaan (马来语月刊) and Abdullah Hussain (a future Malaysian National Laureate) was invited to be the co-editor. Lu brought out 17 issues of the well-received magazine until May 1961 when he suddenly passed away. He was lauded for his master of the Malay language and his untimely demise at the young age of 38 was a sad loss for the local Chinese and Malay literary community.