Kitakyushu, a city on Kyushu Island, came to be one of Japan’s biggest manufacturing sectors in the 1960s, during which Japan was experiencing sharp economic growth. The city met with problems of air and water pollution due to industrial activities in the area, causing the intense suffering of Dokai Bay, later termed the “Sea of Death”. However, this gave the people of Kitakyushu an opportunity to show the world their expertise in sustainability. The Environmental Pollution Control Bureau (EPCB) was established, along with The City of Kitakyushu Pollution Control Ordinance (CKPCO) later on, which enforced stringent and meticulous regulations on pollution. These were firsts of the many green initiatives which sprouted for Kitakyushu, and together with the people’s cooperation, their environment recovered remarkably and was awarded the title of “Gray City to a Green City”, to lead the globe by example. 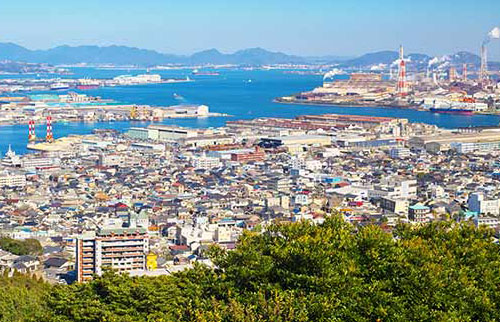 The environmental issues that the city faced illustrate the ambiguous relationship that Japan has always shared with nature. The control over nature, which resulted in its destruction, followed by the desire to repair and protect nature. Kitakyushu’s successful attempt to alter the consequences of its actions on the environment while promoting economic growth served as a good example to fellow developed countries, making Japan a modern leader in green initiatives. All this was achieved despite previously being one of the most industrial areas in Japan, showing the importance of its transformation in this climate change era.

The implementation of the “Kitakyushu Ecotown Plan” in light of pressing global waste issues, pushes for the recycling of various items such as plastic bottles, automobiles and electric appliances etcetera.  The city aims to recycle both resources and energy while promoting environmentally-conscious activities. With majority of the plan carried out in Hibikinada, Northwestern Kitakyushu, giving the city an edge in issues of sustainability. The prioritisation of recycling and reducing nearly all types of waste coupled with the goal of creating new environmental sectors reflects Kitakyushu’s determination towards a greener future. These further green efforts which developed from their initial pollution problems also supports Japan’s eco-friendly relationship with nature.

However, it is important to delve into any underlying motives Japan has in investing in sustainability efforts. Their destruction of the Dokai Basin parallels the wrecking of the Kinai Basin in the Nara-Heian period, when there was intense abuse of forest areas. (Totman, 2009) Similarly, Kitakyushu only commenced its green initiatives after realising that its environment could not take further pollution. Totman explained the cycle of Japan’s increasingly intensified abuse of its forests over the progression of the 4 periods, along with how Japan managed to fix what they broke each time, thereby depicting their control over nature. Kitakyushu did not suddenly go green because of their love for nature. Instead, it was the fact that nature was their habitat and thus they had to take action to save themselves; revealing their reliance on nature. Plausible economic reasons include the Dokai Basin as a source of fishing resources which is vital to their community. Therefore nature could very well just be an instrument for the Japanese to achieve what they want.

Their aim to attain the title of World Capital of Sustainable Development may be fuelled by the need to uphold their image of their love for nature (Kalland and Asquith, 1997) and the desire to be seen as a pioneer of sustainability by the international community. Their planning for the 2020 Olympic and Paralympic Games in which sustainability plays a key role, is another manifestation of this desire. With more green or sustainability related awards on Japan’s shelf, her resume for being a green nation becomes more substantiated which would pave the way for potential investors. This is how Japan might want to be thought of – being the only nation that has a special relationship with nature, rather than actually caring for the environment.