In my last blog, I will share some insights about organizational culture. I will try to demonstrate that it is a powerful tool for the company if it is used in the right way but that it can also lead to some strong inefficiency if organizational culture slips out of control. I will use the example of Apple during this whole blog to illustrate my thoughts.

Let’s try to see why, in my opinion, organizational culture can be a powerful tool. First of all, it can give a sense of unity to the people in the company.  The advantage of this is that it leads to an increase in motivation and satisfaction because people feel that they belong to a group.  Moreover, they want to satisfy the group they belong to by adapting their behaviour and beliefs. They do this to be even more part of the unified group. The other human advantage linked to having a common culture is that it increases the effectiveness because people understand each other, have the same values and goals. Indeed it is important to have different skills within a group but studies showed that culturally heterogeneous groups do not always perform the best, especially during their first 3 months of common group. This was shown for geographical cultural differences but I believe it is also applicable to people with a different organizational and work culture. (See source 1)

Secondly, organizational culture can reinforce the goals and formal structure of the company if there is a good alignment between them. This leads to a better credibility of the company and it increases its effectiveness. If the alignment is poor, it might lead to a sentiment of being lost. People will feel that things don’t go in the same direction within the company and they will have difficulties knowing which direction to follow. On the contrary, if the culture is well defined, it can be strongly aligned with the goals and the organizational design and this will give direction to people and increase effectiveness. For example, under Steve Jobs, the design of Apple was totally CEO-centric as it can be seen on the next schema. The culture was also CEO-centric thanks to a very charismatic leader who was at the centre of the decision process and at the centre of the design. He also was the link for important decision making and goal setting. We can see that all this is perfectly aligned and indeed, Apple’s efficiency under Steve Jobs was optimal. 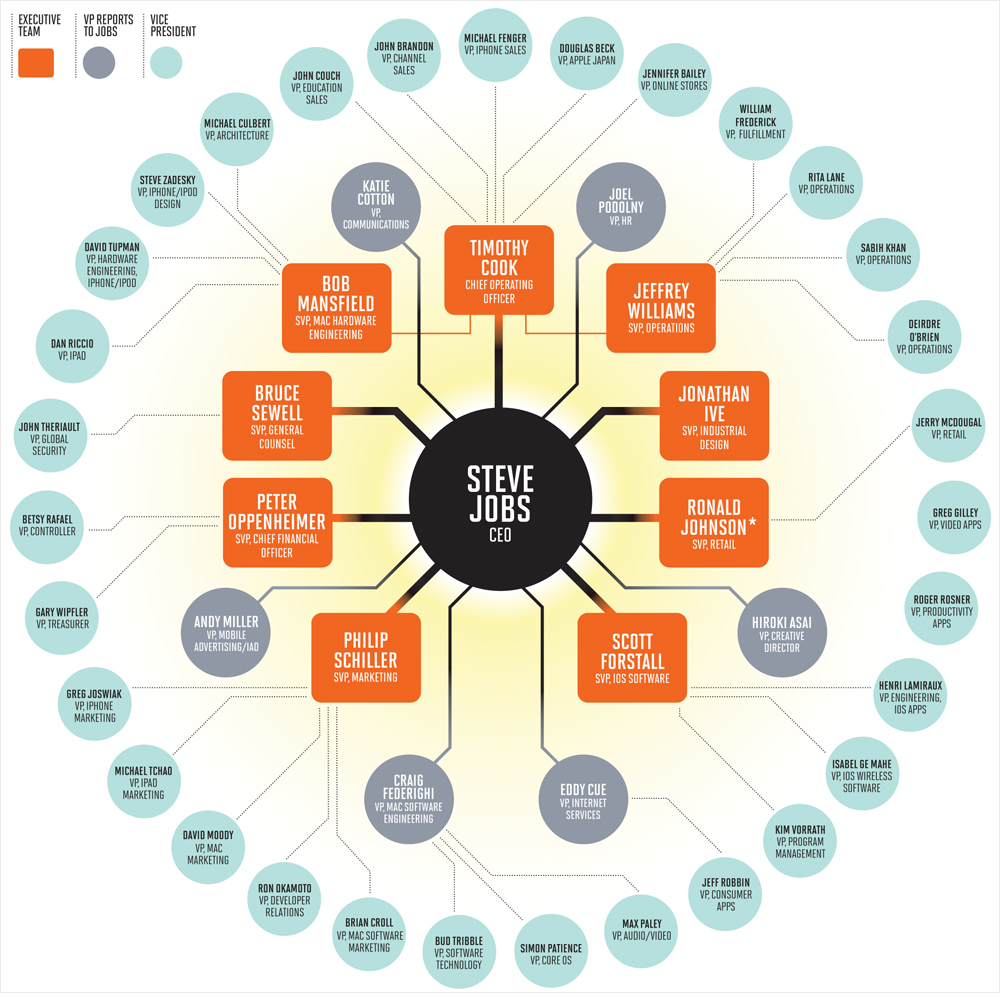 A third positive point but that can be a little controversial is that culture can be used to “manipulate” or influence people to attain objectives in a smoother way. Since the culture usually spreads from the top to the bottom, the board can decide on how to influence the culture (but let’s note that changing a strong culture is a long and difficult process). For example, a main goal of Apple is to innovate, for this, Steve Jobs decided to really orient the culture on innovation and everyone in the company was committed to it. Tim Cook, the new CEO also tries to keep this tradition of innovation by launching the “Blue Sky” program that allows employees to take two weeks per year to work on projects that are unrelated to their jobs at Apple. All this influences the people to be in phase with the innovation culture.

Another problem with a strong organizational culture is that people need to adapt to it or they will not survive. People who are not able to adapt to the cultural environment might be stressed and it could even lead to burnouts. The effect of it can be positive for the company because an auto-selection process can appear: people who are not committed to the culture will leave the company by themselves because they do not feel part of the organization. This is the case in Amazone where there is a culture of conflict. Employees who are not adapted to it leave the company by themselves because they do not like the atmosphere. This leads to big cost-savings for Amazone because it does not have to invest a lot in low-level employees since this is a phase with high turnover where people will leave the company by themselves if they do not feel at ease with the culture. On the other hand, this can also lead to depressions and burnouts because of such a competitive and rude environment.